Coming back to the first question, this one is easy thanks to my big nerd list of my favourite games of all time ever.

The Perils of Willy (read more here) will always be my favourite VIC-20 game, but this was the first time I’d thought about a top five, and genuinely didn’t know most of what was going to follow when I went through my big list looking for VIC-20 games from top to bottom. Andes Attack, Jeff Minter’s llama-focussed Defender clone, was a surprise in second place – without thinking much I actually thought I was going to see Submarine Commander there! But thinking much about it, it’s probably right in my mind. As is Omega Race in fifth place, and our subject here, Jetpac, in third. I don’t like that Pinball Wizard (read more here) isn’t there though! But taking away the all important nostalgia factor, we come to the second question – where does it fit in the top VIC-20 games?

Even through my rose-tinted spectacles, I can look at my list and say that The Perils of Willy [maybe!] isn’t the best game on the VIC-20, though I won’t hear any argument that it isn’t up there somewhere!!! But seriously, looking at my list here for the first time, extracted like this as my VIC-20 top five, the first thing that came to mind was hang on, why isn’t Jetpac in first place? Instinctively, surely there’s no better game on the platform from a technical viewpoint, or aesthetically, or in terms of gameplay or longevity? From my top five, maybe Submarine Commander is an equivalent technical marvel, but I reluctantly concede that its gameplay has a more niche appeal. Omega Race also needs to be in there as an almost flawless conversion of the incredible playable – and re-playable – twist on Asteroids arcade game. Add a few other titles I’m familiar with, and after far more personal deliberation that was probably necessary, we have this:

We’ll get into Jetpac (finally) in a minute. In second and third place, I could easily switch positions between Omega Race and another incredible arcade conversion feat in Gorf, a multi-level spin on Space Invaders that included screen effects like I’d never seen before, not to mention the biggest enemy I’d ever seen with the Flag Ship appearing every four levels! Then we have Jump Jet (read more here), which is a Harrier flight-sim that at the time I got it was surely as good as flight sims would ever get! I could argue that A.C.E. (Air Combat Emulator) – coincidentally another flight-sim – should be in this spot too, but that was even harder than this was, and its plane couldn’t take off vertically from an aircraft carrier! It never made me air-sick like its box said it might either… Then we have Pirate Cove, part of that incredibly immersive VIC-20 text-based adventure series (almost any of which could really be here instead if you prefer) by Scott Adams where you “Go North” or “Use Mongoose” (to kill a snake if I remember right)! And if I also remember right, the first game I ever finished, not long after the mongoose incident!

List complete, and there we have it. Jetpac is officially the best game ever on the VIC-20! We should find out why.

Jetpac was released by Ultimate in 1983, but I’m fairly certain I got this after Christmas in 1984; it definitely needed an 8K expansion so it wouldn’t have been much earlier than that. Without doubt it was the screenshots on an advert or review I’d seen in C&VG or Commodore User, or on the back of the box, that attracted me to it, and amazingly they were probably even VIC-20 screenshots and not, as was usually the case, nefariously hijacked from a C64 version (which in this case never actually appeared). They could have come from the Spectrum version, but any VIC owner could proudly say that even if they did, you’d struggle to tell the difference. In fact, this was especially true because the VIC-20 version had colour clash that any Spectrum owner would have been proud of! 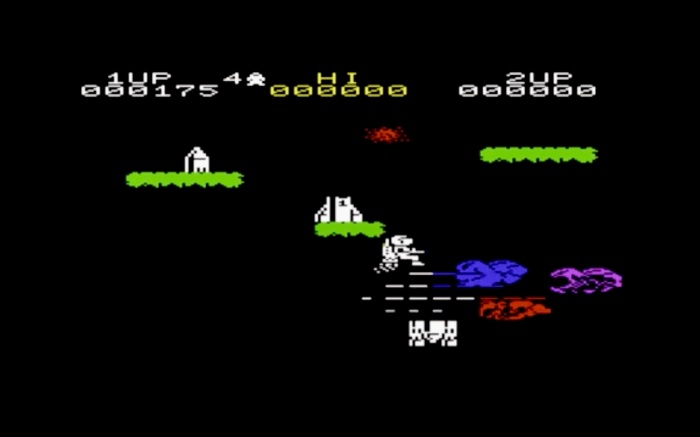 You play as Jetman, though bit like Mario’s first appearance in Donkey Kong, I don’t remember ever knowing him as Jetman – he was just an astronaut with a jet-pack and a blaster who had crashed on a planet far, far away and had to rebuild his rocket from the bits strewn about the place then fuel it up and start making his way home. All of this happens on a single wraparound screen, with three rocket parts that had to be dropped on top of each other in order, which you’d find lying on the ground or on mid-air ledges, whilst fending off the planet’s fauna that randomly flies around the place impeding your quest. Once you’ve put the rocket back together, fuel starts dropping out of the sky, also randomly landing around the screen, together with bonus jewels and stuff, which you collect and drop onto your rocket until it’s full up. Then you walk back into the rocket, it takes off and you start collecting fuel on the next planet, which is a similar screen but with a whole new set of meanies to attend to.

The game loops around a set of four levels, after which you’ve obviously crashed again and need to rebuild the rocket from scratch, which makes for the perfect setting for the game’s score-chasing intentions. This simplicity is what makes the game great – this gameplay loop is without fault, and it sits in the company of Donkey Kong, Pac-Man, Space Invaders, etc. as timeless games that play just as well today, still offering endless challenge and replayability. 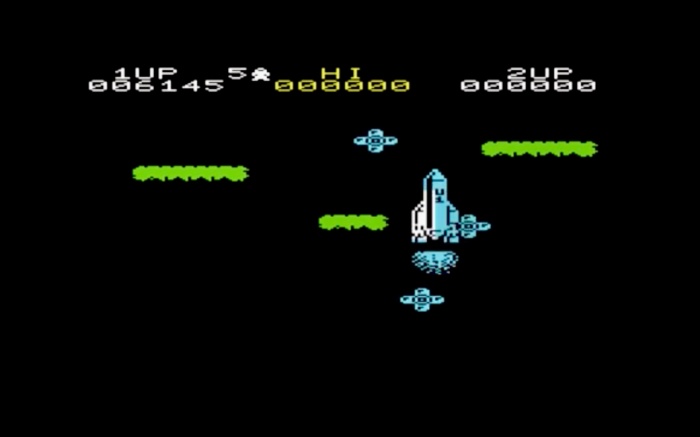 The sound is very functional and of its time, but the aforementioned graphics are absolutely outstanding, and unlike most VIC games stand up just as well today, with big bold sprites for the main character and the various enemies, and this incredible sense of scale as the rocket is put back together. And when you eventually fill it up with enough fuel, that sense of exhilaration as it takes of and exits the screen is still there today too! The planet design, in contrast, couldn’t be more basic, with three platforms suspended over blackness – there’s not even any ground at the bottom of the screen! But you won’t even notice that when you’re frantically trying to create a path through a kind of large-scale bullet-hell array of fast-paced aliens, either by shooting or dodging or sheer fluke as you panic your way around to get to a rocket part or fuel drop or tasty morsel. And I say you won’t even notice it because for all the hours I’ve spent playing this over decades, I didn’t either until just now! There’s a lovely subtle flame effect from your jet-pack, which moves as you change direction, and from the rocket too as it flies up the screen; the aliens have their own explosion animation too, and I really like that this happens when they crash into a platform as well as when you shoot them. Aside from a bit of flicker, you really have to pinch yourself and say yes, this really is happening on a VIC-20!

And all of this is why Jetpac sits at the top of the pile for the VIC-20, even if it’s not actually as good as The Perils of Willy in my opinion!

I’ve never played any of the Jetman sequels, and have steered clear of the overly restyled XBOX title Jetpac Refuelled, but did eventually play the Spectrum version of Jetpac in 2018, when the Rare Replay collection went backwards compatible on XBOX One. You’ve got more screen space to play in and it’s the same fantastic, timeless game that the VIC-20 offered, but it doesn’t seem quite as fast and frantic, so I’m sticking with the VIC as having the superior version despite only having half the levels of the Spectrum version. And saying that is even more incredible when you come back to what a technical achievement it is that it’s on there at all, when it’s not such a technical marvel on the Spectrum; and when you consider the pedigree of Ultimate’s other games on the Spectrum. Really incredible!