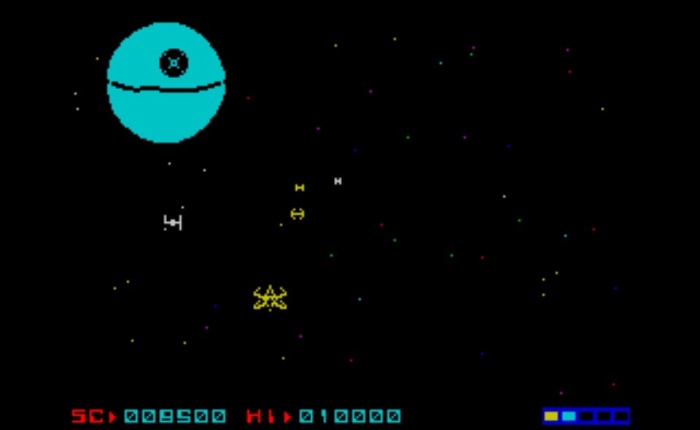 The April 1985 issue was when I decided I needed to buy my own copy of Computer & Video Games magazine, and not rely on reading hand-me-downs from friends when they were feeling generous. What might have sparked the decision was the type-in game Starship Victory for the unexpanded VIC-20; I was big into those at the time (as you can read about here) and there was no way I was missing out on a cool Asteroids clone like this! There were also a few reviews that probably caught my eye – at the time, there was still pretty good coverage for the VIC-20 here, but of course we were in the minority… and you couldn’t help looking over the fence at what you were missing out on for the big new machines! Impossible Mission, Ghostbusters and Cauldron being of particular note that month! It wasn’t so much jealousy – at least for a year or two – but just wanting to lap up the massive amount of exponentially increasingly incredible games that were now coming out on a massive amount of computers; in that month alone, a quick scan just now revealed stuff for BBC, Electron, C64, Spectrum, VIC-20, MSX, Atari, Amstrad, Dragon and Texas, and I’m sure I missed some PET and C16 stuff too!

I’ve never been that big into superhero stuff, but I always consider the May 1985 cover of C&VG as iconic as well as fairly unique in its styling for them. There’s so much going on in both the main illustration itself and also the text blurb around it. Amazingly, if you actually read it, it was mostly all just promoting stuff you could win, including a copy of text-adventure Questprobe 3, featuring the featured Fantastic Four, but not forgetting a map of Alien 8, which was about the first thing shoved in your face after the contents page! What really stuck in my mind that month though was the advert inside the cover for a game called Deathstar Interceptor by System 3 Software.

I might not have been into superheroes, but Star Wars was another matter, and that X-Wing and the three screenshots had me hooked (mostly because the text was pink on black which was near enough to my red-black colour blindness to make it not worth trying to read). Definitely a Star Wars game though, even though it doesn’t mention it! Strange… Actually, it barely even mentions what the game’s called, which is why it might have long-since escaped my memory by the time I eventually got a Spectrum, and would do so for another 35 years until I was sorting through a stack of old computer games magazines in the garage!

“The Fight Continues… On The Spectrum. …Earth is threatened by an Empire Deathstar, can you penetrate its defences, destroy it before it destroys you? …Deathstar Interceptor gives you 12 screens of 3D graphics, super smooth 3D animations, unbelievable sound effects, music, 4 skill levels and hiscore table …this is the ultimate challenge! …This game has to be seen to be believed! You have not seen what the 48K Spectrum is capable of until you have played Deathstar Interceptor.”

I was probably just as well off with the screenshots! The first one is the first part of the game. A real oddity where you’re taking off in your X-Wing, which at some point will veer off to the side of its own accord and you have to guide it back towards the hyperspace thingy (I guess) at the top. It’s not very scientific and seems to be a matter of luck if your single press in the right direction actually gets you into the middle of it or not, allowing you to proceed into space and the second screenshot!

This looks fantastic; it’s a kind of Galaxians with tie-fighters and some other nasties, and you have horizontal and a bit of vertical movement… Expert tip – move to the top left and nothing can shoot you! As this is going on, the Empire Deathstar is getting bigger and bigger it’s close enough, then you’re into the trench. There’s a couple of phases, involving dodging lasers from the sides then shooting some more enemies, then either I got lucky with an unintentional shot to the exhaust port (unintentional because I never even noticed it) or it does it for you.

Either way, you’re rewarded by the ultimate insult to the red-black colour blindness sufferer – the red explosion in the black of space! Like the advert, I don’t think I was missing a lot here; it was hardly the mind-blower when the same thing happened in the Star Wars arcade game. Then you start all over again, looping until you die and you get a really nice rendition of the Star Wars theme.

If you look hard enough, the advert also mentions it’s available for the Commodore 64. Not surprised they didn’t make a big deal of it though – it’s a shocker! The Spectrum game looks like a Star Wars game and has a bit of variety to its “12 screens of 3D graphics” but for as much as I played of it, the second stage en-route to the Empire Deathstar is a really ropey shooter, then when you get to the trench you’re still playing the same ropey shooter as before but against a trench background. And you’re not even fighting tie fighters in the C64 version, but what look like coat hangers and hamburgers!

The best thing here is the Empire Deathstar design in the second stage though – for some reason, the C64 version has the big round shooting part at the top of the Empire Deathstar repeated at the bottom too! Two death bits! Even the Star Wars theme sounds better on the Spectrum, and when did you last hear that?

As you can tell, at the time of writing in the year 2020 I’ve now played both versions (actually both emulated on a PlayStation Classic console!), and I even got to the end of the Spectrum’s loop. And I think I appreciated that version at least a little more than I would of in 1986 or 1987 when I got my Spectrum +2 because there was loads more going on there then than hunting out this old Star Wars curio I couldn’t remember the name of anyway. The Spectrum version is really fun!

But what about Star Wars? Is this a Star Wars game? Or was it really the case the in the wild west of video games in the mid-80’s you could get away with ripping off even Star Wars this blatantly? Well, partially at least it seems. I’ve learnt recently that the Star Wars theme tune was licensed, but as for the rest, probably not! Which might explain certain aspects of the advert, and using words like “Empire Deathstar,” and not even mentioning their limited official Star Wars licensing, let alone barely mentioning what the game is called! A curio indeed.