Expanding my VIC-20 to 16K RAM was always going to be a hard sell to my parents. “This plug-in cartridge adds 16K RAM to your VIC’s memory, which allows you to write and use longer programs, store more data and increase your VIC’s capacity.” To an 11-year old equipped with his Ladybird How it Works… The Computer book and a couple of marathon type-in games under my belt, it all made perfect sense, but between Christmas 1983 and Christmas 1984, none of this really translated into parental justification!

During that time though, one thing happened, that in my mind at least, was all the justification anyone needed – I played The Perils of Willy at my friend Steven’s house! Not being able to afford most of the exotica you saw every month in Computer & Video Games magazine, this method of games discovery would be a mainstay for the next few years, at least until he went C64 and I went Spectrum, and things like Ghostbusters happened… Having said that, as I write this I’ve just had a go at their version of Green Beret on my new C64 Mini, and they definitely didn’t get it all their own way! 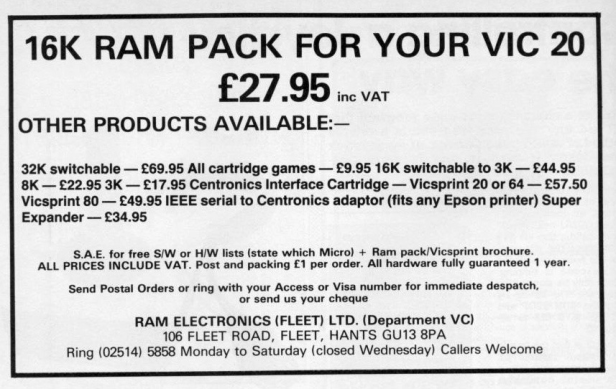 Over the course of 1984 – the greatest year in pop music history – I became extremely clued up on Frankie Goes to Hollywood, Spandau Ballet and Duran Duran, but I think I stayed pretty oblivious to Miner Willy’s other adventures on the ZX Spectrum. I would later own Jet Set Willy on there, and play Jet Set Willy 2 on the Commodore 64, but it would be more than thirty years later that I’d actually get my mitts on the wonderful Manic Miner! 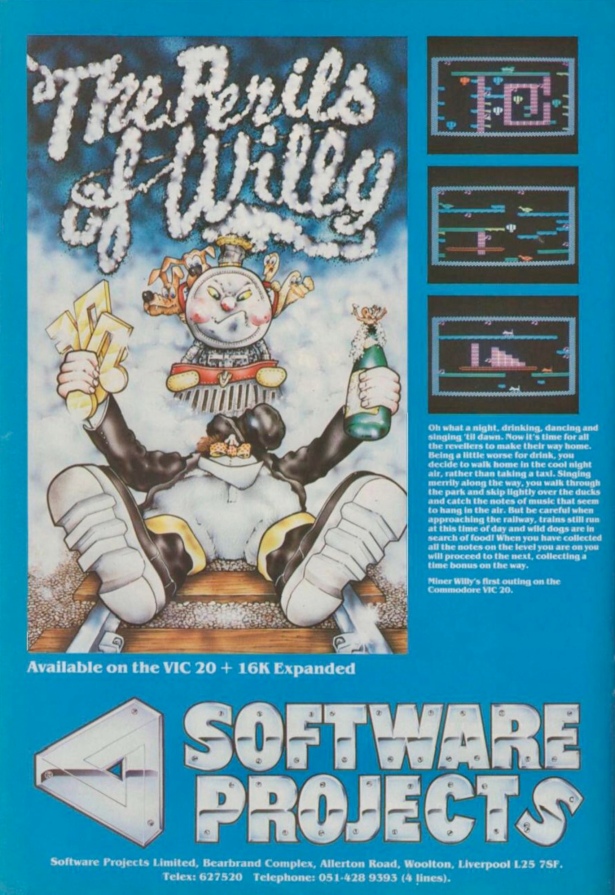 The year went by, and despite still not having a clue what this bizarre, anonymous brown box that plugged into the back of my VIC-20 did, the 16K Expansion cartridge and a copy of The Perils of Willy were dutifully delivered by my parents for Christmas after months of badgering – there may have been some doubt about people knowing it was Christmas time that year, but I definitely knew it!

You could look at The Perils of Willy as a stripped-down Manic Miner knock-off that somehow found it’s way, via Software Projects, onto the VIC-20 – it may have now been a massive 16K beast to me, but to most I guess it was seen as a dying minnow, expanded or not, at that time. However, I prefer to see it as the official Miner Willy game developed exclusively for the VIC-20 that it really was. The Spectrum crowd could only look on in wonder and jealousy at the 33 screens and superior sound! 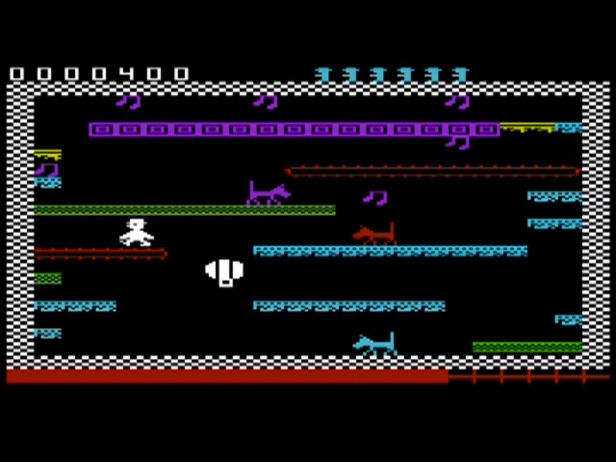 The premise is that Willy’s had a bit too much to drink on a night out and decides to walk home, catching the notes of music “that seem to hang in the air” across a variety of screens meant to be parks, railways, possibly rooms and other areas. Unlike Manic Miner, none of the locations were named, and given they’re generally a colourful jumble of platforms and conveyor belts with killer dogs, ducks and balloons flying about, it can be hard to work out where you’re at. But the gameplay itself makes it straightforward enough to navigate – collect the notes on the screen within a certain time and you move onto the next. What’s not straightforward is playing it! This is a tough game requiring precision timing of jumps that are a bit floaty (even though Willy appears to have put on a bit of weight on the VIC-20) and take some getting used to, but once you do then this is as much fun as any other Miner Willy game. What I really loved were the dirt platforms that dropped away as you ran over them – real Indiana Jones stuff (which, as a side note, I potentially saw for the first time at my Grandma’s house on Christmas Day night the very day I got the game)! 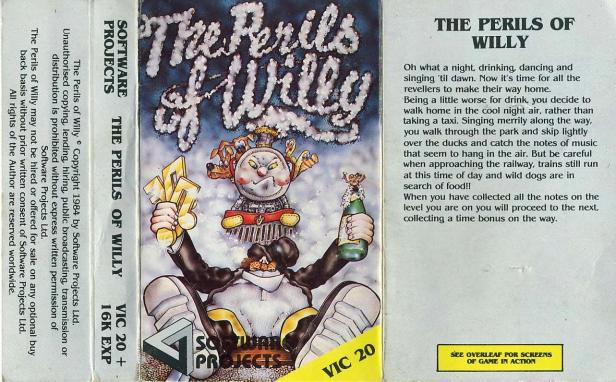 Despite the hours spent being hypnotised by one of the most “hardcore” 8-bit theme tunes ever created, I never did finish it – I do recall there being a POKE in Computer & Video Games giving you 255 lives. I also recall starting it with POKE in hand on a Sunday morning, leaving it on whilst out with the family on Sunday afternoon, then playing until bedtime, and surreptitiously leaving it on overnight and all day Monday while I was at school. I got through a hell of a lot of it (or, put another way, less than 33 screens of it), but never got to the end game. Assuming there actually was one, as it was rumoured it never finished even after 33 screens!

I guess if I’d played Manic Miner or Jet Set Willy at the time I might feel differently, but I didn’t and The Perils of Willy remains my favourite old-school platformer. Ever!

Always worth poking your head through the hedges to see what’s on the other side.