Never regret something that made you smile… I’m not sure the free Space Spinner on issue one of the relaunched Eagle comic on the 27th March 1982 made me smile enough not to regret tearing lumps out of the cover to get the sellotape off! 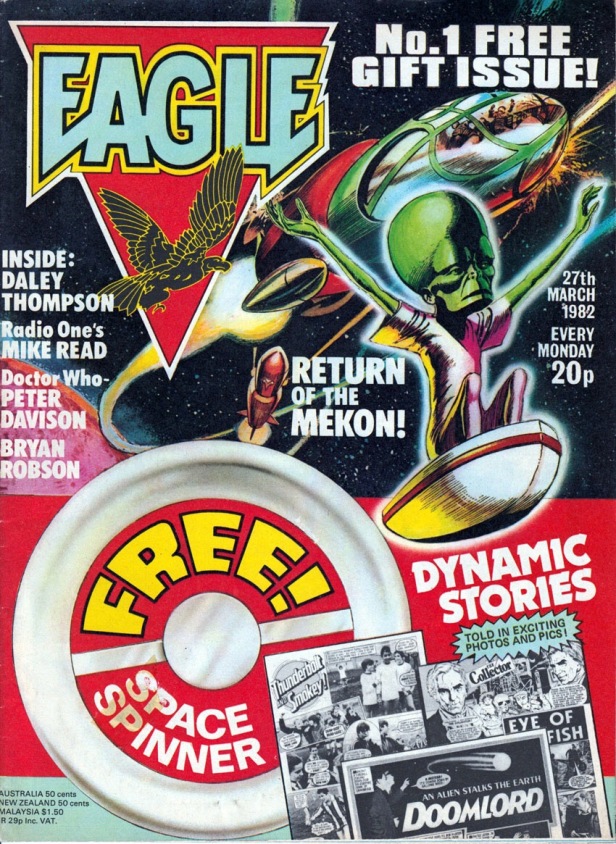 I’d read a few old annuals that had belonged to my Dad, but this was the start of my real love for Eagle that would last several years until peer pressure would see me switch to 2000AD. It started out pretty exotic to someone who’d previously read TV Comic, Whizzer & Chips and Beano – it was full of photo stories! Yes, like girls’ comics had! But they didn’t have Sgt. Streetwise or Doomlord, the alien in a crappy rubber mask and an outfit borrowed from Liberace’s wardrobe. And, of course, Dan Dare, who thankfully kicked off in a more traditional comic strip format, with Return of the Mekon. This was the guy I knew from my Dad’s old stuff, though actually the 1982 version was his great, great grandson from 200 years in the future.

The game appeared four years later. The Mekon’s returned again, this time threatening to destroy the Earth with a hollowed out asteroid. Once Dan arrives on it, you’ve got two hours to explore the subterranean structures to find five bits of a self destruct mechanism, one on each level. Lose all your energy and you’re put away for ten minutes. This all equates to running about with your laser gun, exploring and shooting Treens.

It’s great fun, and is a dream come true for any Eagle fan – with captions aiding the story, it feels like the comic come to life. But what really makes it come to life is how it looks; this game was utterly goundbreaking as far as the Spectrum was concerned. Absolutely loads of colour – probably more than any other Spectrum game at the time – and not a not a hint of clashing. The character animation is also superb, and everything runs super fast and smoothly. The whole package was a real landmark in Spectrum gaming, to the point that loading it the first time gave you that same sense of awe you’d get moving up to the next generation of machines. 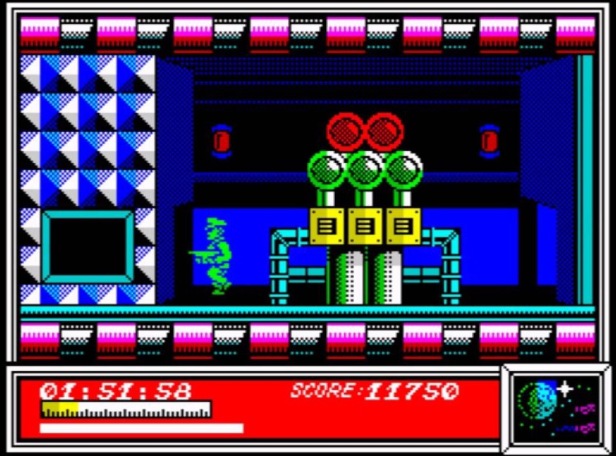 I don’t think I ever found all five pieces, but for the rest of my time with the Spectrum it remained close to hand (in one of those dreadful rotating tape holders), long after the comic was a distant memory, lost to Judge Dredd, Rogue Trooper and Nemesis the Warlock, whose spin-off games never quite had the same impact, though we’ll come back to those later. The same is true of Dan Dare II: Mekon’s Revenge and Dan Dare III: The Escape, despite the latter probably being the final word in colourful Spectrum games!

See you next time with something from my Atari ST days.

2 thoughts on “My Life With… Dan Dare: Pilot of the Future – ZX Spectrum”

The Fog. Dennis Etchinson. 1980. Based on a motion picture.
Join 510 other followers