Anyway, Ronda Rousey, Charlotte Flair and Becky Lynch headline the biggest event of the year, and after all the build-up and excitement, the match is decided by a botched finish. Rousey is pinned by Lynch, she clearly has her shoulders up, the ref carries on counting regardless, Lynch wins. And whilst the result was predictable, no one saw it coming like that, including, apparently, the competitors; then there’s a second of awkward silence rather than the huge desired pop that was destined to be replayed ad-infinitum from the crowd in attendance; meanwhile those watching at home are rewinding it to check that they really did just screw up the first (and last, while Vince McMahon is still alive) women’s Wrestlemania main event.

And what’s that got to do with Out Run? Well, a couple of days ago at the time of writing, after decades of playing it on all kinds of formats, I got to the end of one of its routes for the first time. On the arcade version no less, thanks to Sega Ages Out Run on Nintendo Switch. Over the past few months, I’ve come close a couple of times and knew that I knew this route well enough that it was just going to take a bit of luck to avoid more than one minor brush with danger, and I’d get there sooner or later. This run felt great, and whilst I didn’t look at the clock as I hit the final stage, I knew I just needed to take it easy, avoid traffic, and I’d do it.

Then suddenly control of the car was taken away from me and I’m seeing the end-game screen. Did I really just get to the end? Did I miss a finish line and a heart-in-mouth second of thinking I’m about to do what I started trying to do more than 30 years ago? After that momentary confusion, the elation of a moment such a long time in coming arrived and what, thinking about it later, is probably my greatest gaming achievement. My heart was racing and would be again every time I thought of what I’d done over the next few hours.

We need to go a long way back before we get to the Switch version though, via a much maligned version of Out Run on the humble ZX Spectrum! But to use another wrestling analogy, it might not be the Attitude Era, but I’ll take Macho Man versus Ricky The Dragon Steamboat every time! (And I’d take either over the bloated, politically correct, creatively bankrupt late night kids TV show we get now).

Before we get there, we need to cover the arcade game too. As usual, I’d seen it coming in Computer & Video Games magazine back in 1986, and I remember being blown away by it in the wild (in Great Yarmouth I think) despite there only being a stand-up cabinet in that seaside arcade, rather than the deluxe sit-down version that was rumoured to spin you around and shake you about. 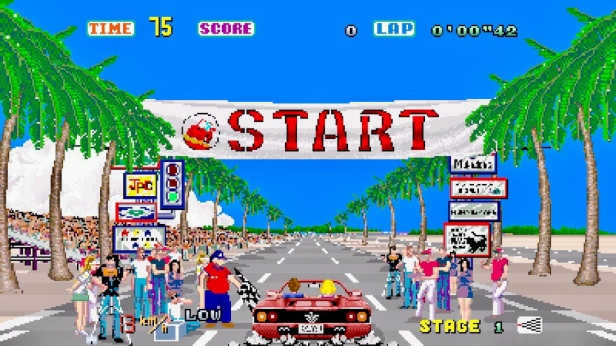 None of that was necessary though. This was the most exotic game ever – as close as you’d get to being in Miami Vice. The palm trees in the sand and the sails in the ocean zooming by; or the feeling of freedom as the road suddenly opens up in the very first corner from three lanes to this huge, six lane highway and the speed really kicks in… That first stage, which is honestly all I ever saw of it for a very long time, with its absolutely astounding graphics flying past at such an astounding speed, was the most exhilarating feeling I’d ever had playing a game. It was pretty tough though, and clearly made to keep your coins going in – hit another car or, even worse, a lorry, and if you were lucky you were just going to take a huge hit on your speed, but otherwise the car was spinning to a stop, or if you hit a roadside obstacle, you and your girl were spectacularly somersaulting through the air together with the Ferrari. And seeing any of these scenarios meant game over sooner rather than later because a very aggressive clock was ticking down to zero on every stage. 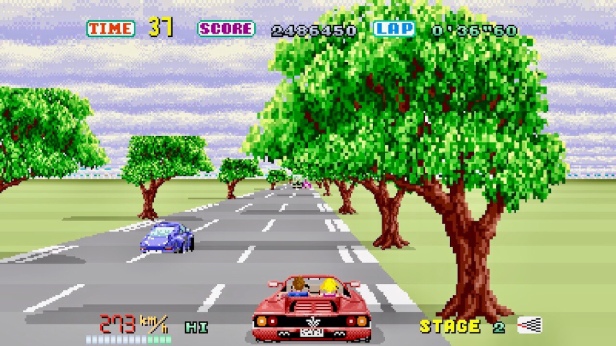 But even back then, strip away the remarkable technical achievement that was Out Run with or without physical bells and whistles, and it was still a lot more than your run of the mill racing game. There were no other racers and there was no first place; it was just you and your Ferrari trying to impress a girl by driving as fast as possible as far as possible down one or the other route of your choosing when (if) you got to the end of each stage, towards five different end locations, with the wind in your hair and the finest soundtrack that has ever graced a video game… That soundtrack! I wonder at what point they realised that Magical Sound Shower, Passing Breeze and Splash Wave were so good that they demanded their own selection screen before you started, with radio frequencies changing as a realistically moving hand moved the dial clockwise through them.

Before I move away from the arcade version for a while, as an aside, life met art earlier this year when I was in Florida with work, playing Out Run on the Switch in a hotel on the beach that was on a road that the first stage could have easily been modelled on. And while we’re aside-ing, now I’ve gone beyond the first stage, I can say that going down the big hill in the fourth of the final stages is now what I believe to be the most exhilarating feeling I’ve ever had playing a game!

As I mentioned in my previous post on Operation Wolf, together with that and R-Type, Out Run was a game I never thought I’d see a home version of. Which might be a lot to do with why I have such fondness for a conversion that everyone else seems to think is such a stinker! Or do they? Hang on just a minute before you start scoffing, while I share some review scores from early in 1988: Your Sinclair 8/10; Sinclair User 81%; Crash 71%. Not so bad, right? And justifiably so! 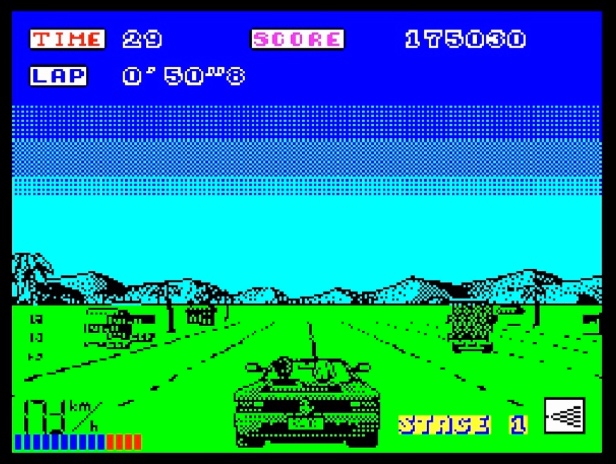 As usual, the Spectrum version took a hit on colours, going for a mostly monochrome look on various boldly coloured backgrounds, but apart from that your Ferrari looked just like you wanted it to – big and convertible with your girl by your side – and everything else looked more than fine and where it should be. You had all the tracks from the arcade version (not that I ever saw two thirds of them) and on my 128K version at least, you had great versions of two of the iconic pieces of music. There was a bit of multi-load going on to do a new track, but it stayed in memory if you were doing the same route again. Again, usual compromises and more than acceptable for having a version of this unbelievable arcade game in your own home. Until Operation Wolf arrived a few months later, getting this for my birthday in May was probably my most anticipated game ever, and I remember the very moment I loaded it up with little time left to do any more than that before I left for school, still not quite believing this was possible! I didn’t even notice it wasn’t quite as fast as the arcade version!

Yes, speed, apparently, is an issue for the Spectrum version that makes it so bad it’s mentioned in the same breath as Pit Fighter (also unjustified), though I’ve just played it again and I still don’t think it’s as bad as everyone thinks it is, looking through today’s eyes, let alone those of more than thirty years ago. It’s still perfectly playable, it’s just as hard as it always was, and it feels fine – just like the review scores from the time said it was!

Now I’m going to jump forward a few decades to Sega Ages Out Run for Nintendo Switch.  What on earth would 1987 me have thought about not just having the actual arcade version in my home, but having it in my hand too, should the mood take me! For less money than the Spectrum cassette was too! And not just the arcade version, but one with different coloured cars and speed, grip and damage buffs as rewards for getting to the end of four of the five routes and a true-to-life arcade experience once you’d done that and the fifth route too… 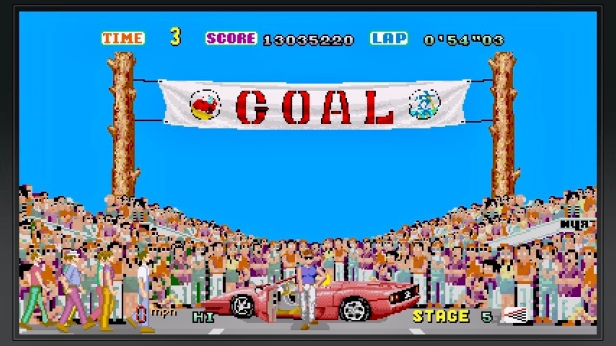 As I said earlier, I did finish the first of the five routes a few days ago with the regular red Ferrari. I was going to stop there – achievement enough and game finished as far as I was concerned – but within a day I was back in my new silver car to try out the increased grip version. Very nice and made corners so much easier. Then I decided I wanted to see every route and unlock every car. On my very next game, taking the same route to the final stage I’d memorised on my first run to the end, I got to the end of the second route. The third was fairly easy too, with only one new track to work out – my feeling is that once you’re on any of the final stages, you can just take it easy enough to avoid mistakes to reach the end. The fourth and fifth were a bit harder because you couldn’t get there by taking a left at the end of stage one, as I’d done all the time to this point, and had to go right instead onto a new set of tracks; they took me a couple more days. Definitely worth doing because the finished car with all four buffs active ends up handling a lot like the original one but a lot faster. Now I’m working my way through each of the routes on the original arcade version that finishing all five unlocked, and with the self-imposed pressure off, I couldn’t love this game any more than I do right now. Seems I’m finally quite good at it too!

Together with the aforementioned R-Type, I don’t think any game from the 80’s has stood the test of time like this has, and despite sequels and endless homages to it, has ever been or will ever be bettered for sheer exhilaration.