For a couple of years, aged fourteen and fifteen, my then-best friend Thomas and I decided it would be a good idea to get each other no income-friendly Christmas presents. For Christmas 1986, knowing a Spectrum +2 was on the way, he acquired a C90 mix tape of Spectrum games for me from another Speccy-owning friend of his. Unfortunately the majority never worked, though I do remember being blown away by my ill-gotten copy of wire-frame helicopter sim, Tomahawk, for actually loading as much as anything else! Speaking of wires, we both dabbled in electronics at that time too, and I recall getting him a selection of different types of wire in return!  Anyway, things went slightly better in 1987 when he got sweets and I fared even better than an industrial load of our favourite lemonade crystals with what would become one of my top five favourite games of all time!

I’m not entirely sure how Olli and Lissa eluded me for a year after it’s release; it was a £1.99 budget game from Firebird in 1986 and I’d bought some right turds at that price through the year! Everything about it was right up my increasingly spooktastic street, albeit in a very cute, cartoony way. But finally we were united, and on Christmas Eve I rode home across town from Thomas’ house on my bike, present safely secured in the pannier bag on the back, completely unaware of how much I was going to fall in love with jumping about an eight-roomed, cruel, beautifully atmospheric yellow castle over the next few hours… until I was dragged off to midnight mass, though at least it got that out of the way for Christmas Day to be lived to the full! 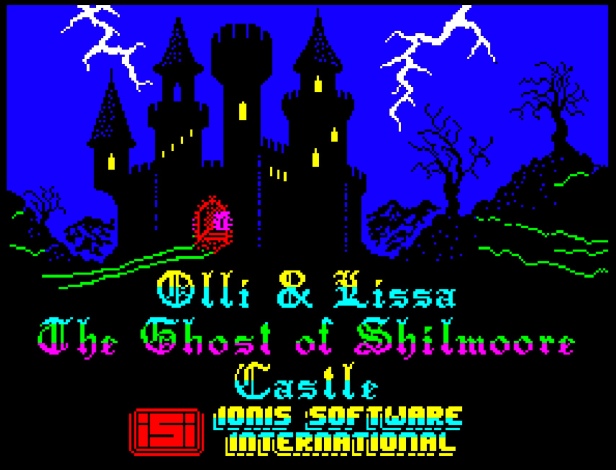 As I write this, I’ve got the title screen playing its looping bursts of multi-layered gothic Spectrum chip-tune, interspersed with pauses for a clap of thunder (white noise) before it ends in a subtle crescendo and you get what seems to be a slightly longer clap of “thunder” before it starts again. It really is one of my favourite pieces of 48K Spectrum music, which I realise isn’t saying a lot, but it does a wonderful job of setting the scene for what follows!

The “menue” screen then introduces the characters while the music thankfully keeps looping for extended enjoyment. The story goes that the ghost of Sir Humphrey needs you, the titular Olli, to get him a load of ingredients so Lissa can mix up an invisibility potion in her big cauldron and he can scare off the folks that are planning on shipping his castle to America. We could debate the amount of fear induced by visible versus invisible ghost, though I suppose it depends on what he’s planning on doing while he’s invisible, so let’s just accept the storyline might not be the game’s greatest strength!

The very first (of the aforementioned eight) screen is everything I love about this game. The creepy atmosphere is just incredible, and bizarrely everything being yellow somehow adds to the atmos! The attention to detail in the little 3D castle windows or the ornate stone flourishes above the portcullises really bring the castle alive. And it doesn’t stop with the backgrounds – don’t move for a second and Olli’s blobby sprite will turn and question what you’re playing at, then start tapping his foot impatiently. Meanwhile, up at the top of the screen, Sir Humphrey’s ghost paces (in a floating kind of way) up and down the platform where Lissa is waiting to mix stuff up.

When you start, Sir Humphrey will tell you what ingredient you need to find next in a little speech bubble, then off you trot to get it. A strange menagerie of gnomes, ghosts, spiders, little paranormal octopus things, bats and a nasty caterpillar will hinder your progress as you hunt around the castle then outside it through the woods and caverns and back across the ramparts to find the his ingredients then make your way back to Lissa and her cauldron where she’ll reward you with a kiss before you set off for the next one.

Not that you’re ever going to see much of that saucy action – this is one brutal, pixel-perfect left, right and jump platformer, and the sight of Sir Humphrey battering you with a brush when you run out of energy (which quickly ticks down regardless of you hitting stuff) is a much more familiar sight! 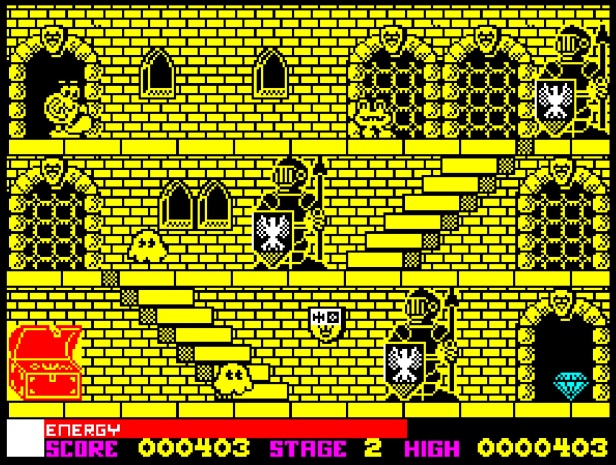 You will spend a very long time jumping over beasties then trying to go up and down stairs before that come back for you in the gap before their rapid return from their movement loop in the first two castle screens before you even get a occasional sniff of the outside world! But given how much I love that castle, it never really put me off, and seeing the spiders on the spooky trees or jumping across the lake was only ever an infrequent but unnecessary bonus. Instead, I did (and still do) while away many a happy hour just dying over and over again… in the cruellest, yellowest, best ever castle in gaming history!

As a footnote, there was eventually a trilogy of these games, but neither of the sequels ever really did much for me. Olli and Lissa II: Halloween, released a year after the original in 1987, had you as a witch on a broom and was a poor-man’s Cauldron (literally!) for as much as I ever played of it. By the time Olli and Lissa III: The Candlelight Adventure arrived in 1989, I’d jumped ship to Atari ST and only played it much more recently. In its defence, it is a more direct evolution of the first game with a more multi-coloured, Firelord-esque graphical style, but it definitely ain’t top five games of all time material like its predecessor!

4 thoughts on “My Life With… Olli and Lissa: The Ghost of Shilmoore Castle – ZX Spectrum”