1987 was the golden age of graphics on the Spectrum. And the 6-PAK Volume 2 compilation included some prime examples, featuring nazi-Gauntlet variant Into the Eagle’s Nest, a great shooter called Light Force, an average flight sim called ACE, the classic International Karate, better-than-Arkanoid Batty, and the stunning Shockway Rider.

I got 6-PAK Volume 2 for Christmas that year. Also memorable for seeing my beloved Ghostbusters for the first time when it premiered on ITV on Boxing Day! And my Grandma buying me Abigail by King Diamond. I’ve no idea how she knew I wanted it, and much less what the shop assistant must have thought when a 62-year old Irish lady turned up at the counter to buy it… or more likely ask for it! But it was something that I immediately fell in love with, and I reckon I’ve listened to at least once per month for the last thirty years, the last time being on my flight to California just a couple of weeks ago. 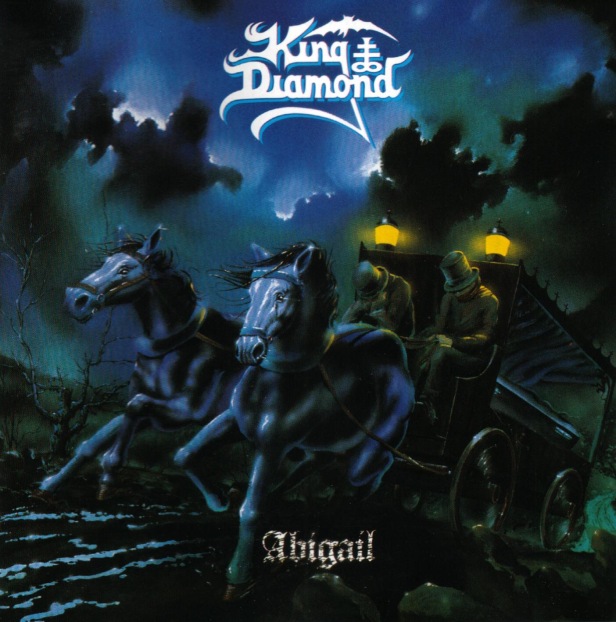 I’d discovered King Diamond in a friend’s copy of Kerrang – a pull out poster of him in full make-up holding a burning upside down cross; that got unfolded in religious education right in the face of the most Catholic of our Catholic school teachers! He got kicked out of the class, the poster got confiscated, and my world moved forward… I can distinctly remember my first listen of Abigail, as soon as we got home from my Grandma’s house on Christmas Day evening. Standing at the record player in a pair of big seventies can headphones (because the lead wouldn’t reach a chair), marvelling at the spine-chilling tale unfolding through every track. It’s a masterpiece, and there’s no finer (or gloriously terrifying) opener to any album ever! I know most of you will never have heard of this, which I pity you for, but just give the opening 40 seconds a go!

But back to Shockway Rider… The name came from a 70’s sci-fi novel, but to me the premise was more than a bit Judge Dredd – the inlay even talked about cruising the triple-speed walkways that circled the “Megacitys of the 21st Century.” (I quote to avoid any responsibility for bad punctuation). Anyway, you’re part of the Shockway Riders, an athletic, aggressive and arrogant street gang, on the cruise to do a full circle of the moving walkway that did indeed move at three speeds, and contained ramps, speed traps, cops, vigilantes and other gangs trying to thwart your “ultimate ambition” to go all the way around… Yes, the story wasn’t its strong point!

What was its strong point was how bold and vibrant it looked, with big, detailed, varied sprites on a bright yellow background. Once you’d jumped off the pavement onto the walkway, the challenge soon mounted as you swapped lanes to collect stuff to chuck at your oncoming enemies, avoiding the obstacles and other pedestrians, who had a habit of morphing into enemies without warning! Actually, swapping lanes was probably the biggest challenge – jump timing wasn’t exactly forgiving. That was slightly compensated by the death animation though – once you’d inexplicably exploded, all that was left was your head on the conveyor belt you died on.

There wasn’t a massive amount of progression – I think the backgrounds changed and the obstacles changed as you went from block to block – but it stayed true to its simple concept and that continues to be its strength.

To finish on what I didn’t realise would be a related topic before I started writing this, as well as a list of top several hundred games, I have a list of top ten albums, where King Diamond’s Abigail will forever reside…

One thought on “My Life With… Shockway Rider – ZX Spectrum ”

Apart from Bathory in my headphones, there’s total silence here.
Join 638 other subscribers