British Transport Films made documentaries about British transport. Readers of a certain age might remember a couple of rail safety films they made that were sometimes rolled out – literally – on the school TV; the ones on the trolley with the big wooden doors on the screen. Their best known output, though, was surely London to Brighton in Four Minutes. TV gold at the time. And the sole reason that I ever had any interest in ever owning this “superb simulation of a dull subject” as Zzap!64 summarised in its review. That said, I’m sure this teenage nerd was just a bit excited about driving a fully 3D steam train on his Spectrum! 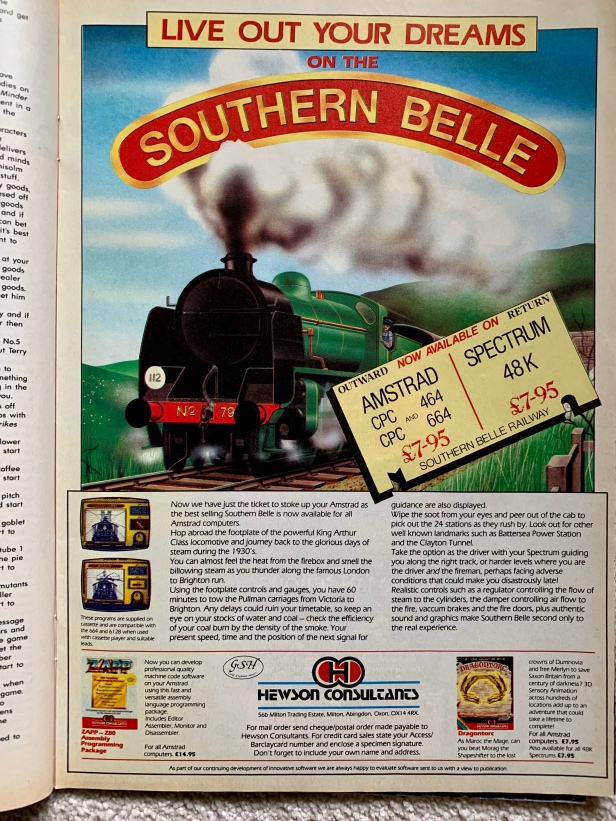 Southern Belle appeared out of Hewson in 1985. I’d seen it in C&VG and it did look like nothing I’d seen before, but it was still a train game and was quickly forgotten. I reckon it was August 1987 that it jumped out at me at a service station on the M4. Actually, it was probably the bargain price of £1.99 that jumped out at me, just after I’d noticed Ghosts ‘n Goblins (which I’ll cover next time to avoid repeating the story) at the same bargain price. We were on the way home from a holiday camp in Dorset, the only real memory of which was a shop that had a great reflective Adam Ant badge that I still wear to this day! The only other thing to say is that the rest of the journey was torture with two new games sitting on my lap for hours – there’s a limit to how long an inlay alone can excite you for!

I’ll admit here, Ghosts ‘n Goblins got loaded first, but I wasn’t progressing very far very fast, so the impressive steam train loading screen soon gave way to the moment I’d been waiting for… Computer Demonstration Run mode with the London to Brighton speed run! It didn’t quite have the visual thrills of the BTF film, but it didn’t disappoint, and to this day is something to impress your friends with. If they are train spotters impressed by monochrome vector graphics running at a frame per second thirty years on.

The game itself was much less of a speed run. You decide how much you want to control (I recommend not going beyond the whistle), the timetable difficulty, then you set off from Victoria Station and  literally chug past a very recognisable Battersea Power Station and on your way. The rest of the trip to Brighton is less recognisable. There’s some impressive tunnels but generally it’s the odd shed or signal until the next station. Just variants of black lines on a white background, with only the red fire to spice things up and keep it real. And of course the garish yellow border.

I’m not sure I ever made it to Brighton. I certainly didn’t make it on time. But that wasn’t the point. You were driving a steam train, in all its glamour, in the real world. And in 1987 you didn’t need to be a train spotter to love that.

See you next time when I’ll cover Arthur and his big lance.

One thought on “My Life With… Southern Belle – ZX Spectrum”